Return to the City 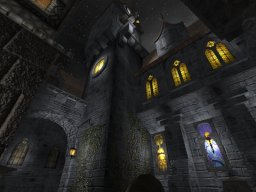 Introduction
Back among these old walls again, it seems. The alleyways and courts beckon, the smells and flickering lights the same as ever. Have I been away so little that I remember them all? No matter. This time, my objective once more brings me to the Builders: one of their workshops has recently received a shipment of potent explosives. Although inert before it is treated with a volatile compound, there is bound to be a mechanician who will pay a good price for the lot.

Review
Back when this mission was first released, there was a noticeable drop of framerate in locations due to poor optimisation, which only took some of the fun out of playing it, but I persevered at the time despite this. It’s lucky that I decided to hold off doing a review since, because the mission had finally received a much needed update which aimed to optimise the entire map, not only increasing the performance considerably but also adding in a few additional locations to visit, along with other fixes and changes. It was a pleasant surprise to walk around the corner upon loading a new game to find how smooth it ran in comparison. Enough about the technical aspects though and onto the mission itself. Much like the title suggests, it takes place within a part of the city that manages to create an atmosphere similar to that from the first Thief game. Only part of the experience actually takes place around the city streets and there’s not a great deal of places you can enter from here when ignoring the Builder’s monastery, your main target where the explosives can be found. What the mission does offer is the vertical aspect of exploration, for the player to enjoy mantling between buildings and making use of rope arrows. If you can see an open window or some ledge, it will likely be possible that you can get there. Though admittedly it was a shame there wasn’t much more to explore around ground level, but when compared to the older version, there is plenty more to see this time round already. Exploring the city indepth is going to be the only way to find the relevant object to complete the bonus objective afterall, or you can otherwise skip ahead and take care of the main objective instead. 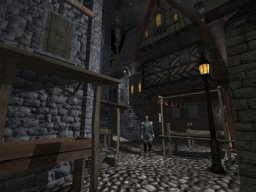 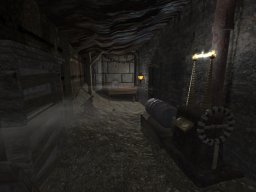 Visuals have vastly improved in the update, with what had already looked good then now contains more detail than ever, yet still performs smoothly. For example, one of the side alleys with stairway used to be fairly plain and bright, while in the new version got a little facelift. Lots of plant life is now placed amongst the dirt including a couple of trees. More decoration has been added to the buildings, mostly around windows, while some of the texturing had been changed to create a grittier appearance. These changes to textures have also allowed areas to become more consistent with one another throughout the mission. The overall outcome is simply an improvement to what was there and feels like some much needed depth was given to these areas. The same is done in various other places, expanding the city and even including more ambiance sounds. There’s one section of street in particular that used to be a long path but has been given a bend in it’s layout using an extension to the nearby building and this even improves the lighting aspect here too. Another nice lighting change is in the monastery attic to really bring out its shape that much more. These changes helps to compliment the solid level design and makes every section feel alive. It’s difficult not to mention the update so often because I cannot emphasis enough how better the experience turned out to be and I’m glad Bikerdube took up the role to help start it. The monastery itself is an appealing sight outdoors and a central piece to the level, standing tall and proud, making good use of the blend between the blue bricks and bright windows all over. It’s only unfortunate we don’t get to see additional areas in here. I was actually hoping that we would be able to enter the door with the note attached to it this time to find out what was beyond. Lighting in general works in favour for both the visuals and gameplay. The city streets are fairly dark with the occasional lamp placed here and there while the indoors are lit up quite well. In both cases it doesn’t distract from the stealth aspects and work well without being too disadvantageous for the guards outoodrs and providing some nice shadows for the indoor locations. 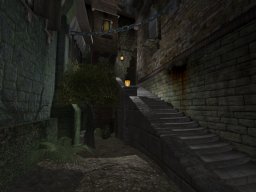 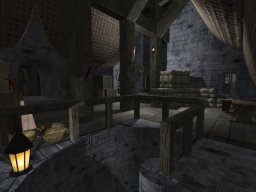 Conclusion
Takes focus on the vertical aspect of exploring the city which remains the most enjoyable part of the mission, with some great looking design and lighting throughout. The update provided a huge boost in performance and offers new areas to check out along with other various fixes and changes.