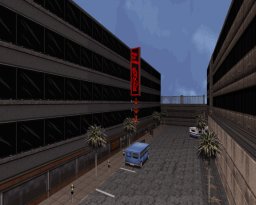 Introduction
Boucher’s second and final release gives us another city map from ’00 and the aliens are up to no good once more, this time hiding out in the nearby multi-story carpark and it’s up to Duke you head inside, take them out and give chase through the canals.

Review
Traffic Jam takes place within the city once more, only this time the majority of gameplay will be spent inside of a multi-story carpark and a canal. After an explosive introduction you can drop down to the city streets below where the entrance is located. Boucher’s second and final release is a major step up from his predecessor, The Slums of LA, in many aspects and shows improvement which only makes it more unfortunate he didn’t release any other maps. First off is the gameplay which has a much better balance of enemies to really provide more of a challenge and is tigher with the ammo and health supplies. The author uses a much higher enemy count to face off against with a variety of different species per group. Another aspect is fighting in the dark where enemies can be concealed, but not enough to be frustrating either. The red car lights in the shadows can even be misleading into thinking a pigcop is there. Or vice versa. Progression on the otherhand takes a linear approach unlike Slums, where you’ll gain access to a floor to battle it out and unlock the next door, whether its by a switch or keycard, to proceed onwards. You don’t spend too much time in the car park where it overstays its welcome however, soon moving over to the aquaduct where the action starts to pick up a little on difficulty. 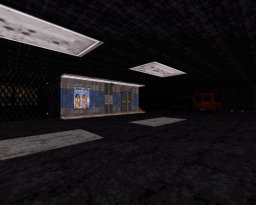 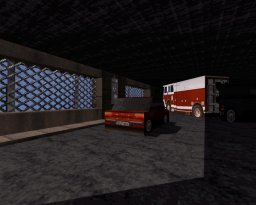 Level design has also improved, becoming more focused on the themes at hand and presenting the location as one would see it. The carpark is filled to the brim with all kinds of vehicles and the new textures allow for this diverse selection. The cars also provide some addition to layout, blocking off specific routes or hiding enemies behind them to surprise you and including a few goodies to grab. Lighting is another area that Boucher had improved on, with bright sunlight shining through the openings and creating a contrast within the darkness. Even one of the cars has headlights left on, shining against the wall which was a nice bit of detail. The aquaduct section later on takes a lot of influence from my favourite section in LameDuke and does it justice by bringing some life into the location. Not only does it use the traits from the construction with the ledges and overpass, but the texture selection is also similar, using mix of white and brown stone walls. 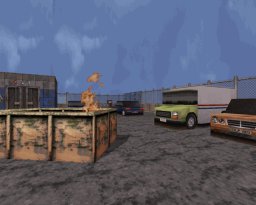 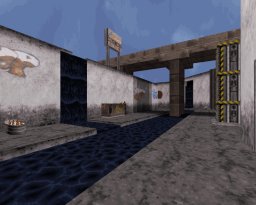 Conclusion
Solid oldie all round where Boucher shows a lot of improvement with the design to create two diverse locations and more challenging gameplay, with higher enemy counts and tighter supplies.