The Slums of L.A 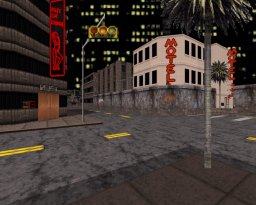 Introduction
We’ll be taking a trip to the past with this little oldie from ’99, Boucher’s first release, a city map which takes place within the slums of LA. It’s not long map, yet provides a small variety of locations to visit while beating down on aliens and searching for keycards.

Review
When the map loads up, you’ll find Duke cooling off inside of a freezer within the local Duke Burger joint, pistol in hand and ready for action. From here you will set out into a small city section and enter a variety of locations such as a petrol station, strip club and weapons store. The design is decent and works well by adding some diversity between each area, including the addition of sewers, an alley around the city and a small rooftop bit at the end. It appears that some influence has been taken from ‘Duke Royale’, a map for the exclusive PSX Duke3D episode from the beginning sections while adding in ideas of his own. There is some nice attention to detail, from making the city feel alive with shadows, moving sludge in sewers while rats scurry around or the vehicles which look great for their time. The oil tanker is especally well made as not to feel too static by constructing the tank part at an angle as if it had recently reversed into place. There are however some glaring problems with texture misalignments in places though, mostly noticable around the places where exploding walls will take place, while minor in other places. 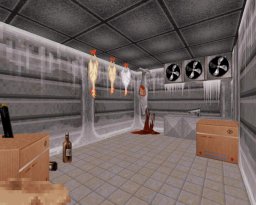 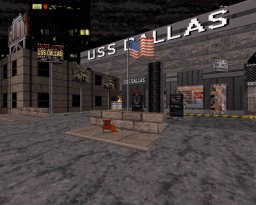 Each major location is locked with a keycard which can be found by exploring the other locations while fighting off small instances of enemies. Most of the time you won’t be fighting more than two or three at a time throughout the map and many of them can be easily picked off with the abundance of ammo scattered around. By the time you have reached the end of the level, you will most likely be holding every weapon type and still plenty of ammo to spare. Progression works well as you’ll explore a good part of an area after unlocking a door before moving onto the next while a new batch of enemies will spawn into the streets to add a little distraction before heading to the next destination. The author is also very generous with atomic healths, adding very little risk and challenge where some heavier brawls or a mini-boss would have been nice to have. Especially considering how abrupt the ending turns out to be, expecting that little more when boarding the UFO. 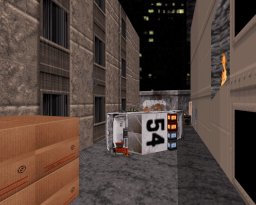 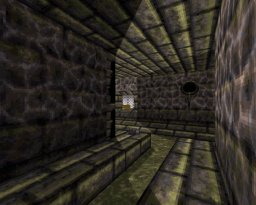 Conclusion
Slums is a short romp through a city with enough diversity of locations for its length and some nice attention to detail in places. Too generous on the ammo and health side resulting in easy combat and some hiccups with texturing.