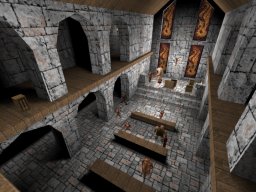 Introduction
Time for a classic little oldie from ’97 where you will find yourself taken prisoner within the halls of an unholy monastery, the place inhabited by the usual bunch of demonic minions. You’re not going to get far sitting inside of that dark cell all day, unless you fancy being cut up and stewed for tonights dinner, it is about time you made that escape.

Review
Even though it’s an oldie dating back a while, the level still holds out pretty well even today. You start inside of a prison cell armed with nothing but a shotgun and trusty axe (ignoring ideas where you may have hid them!) and must now make your escape. One neat little addition I’d like to point out, although simply executed, is the ability to take advantage in certain situations. It works well and one part is actually presented right here at the start. To get out of the cell, you’ll need to get the attention of the knight standing guard outside. Patrolling the courtyard is a Death Knight who will eventually make its way through a large door. You can either go guns blazing despite this or wait until its gone before you attempt escape. This may seem minor but it adds that little extra to the typical Quake gameplay, and this opportunity pops up again here and there. Once you’re out of the cell, finding the exit will be your next task which will involve some button and key hunting. Enemies aren’t going to pose too much of a challenge either, as they’ll be too busy paying attention to whatever role they’ve been assigned to, be it standing guard or using the stove, which results in a lot of backs turned. 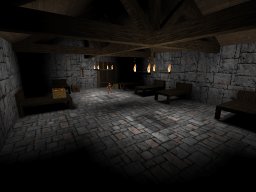 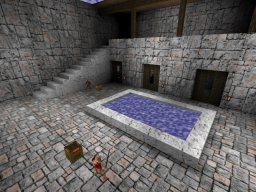 The ‘monastry’ itself is a simple construction ranging from long hallways to large rooms. These locations are as you would expect them to look, from a central chapel and tall belltower to the lower kitchen area and sewers. The texturing doesn’t exactly stand out which only helps make some places feel too bare due to a lot of flat walls. White stone is the prominent texture choice used which tries adding a bright tone, taking a small step away from the usual gritty themes. This is broken in places with several dark corners where the lighting is moderate all round. Progression is pretty simple, not too linear, with several locations you’ll end up exploring and the map isn’t without a touch of humour either. Some of the zombies that hang on the wall are even nice enoguh to drop you tips on how to proceed and there are even secrets to be found. Fights usually consist of small groups at most and some easy Shambler battles. 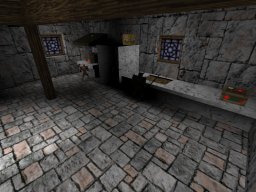 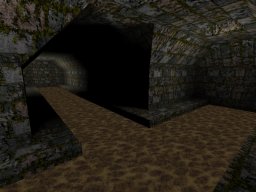 Conclusion
Simple classic from ’97, nothing too special with an average design and easy gameplay, but good fun for several minutes.