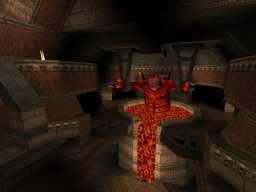 Introduction
Medieval themed level, using mix between redstone and metal textures, with pools of lava resting at the bottom, waiting for an unfortunate victim. There are two different modes of play, from your regular shotgun start or a ‘Carnage-mode’ changing the play style to add that little bit of replay value.

Review
Upon spawning right behind the backs of some grunts, if you jump within the next ten seconds, this will bring you to the settings room which allows you to select the difficulty level and the option to play ‘carnage mode’. Each time a setting is made, it will restart the level. I gave both modes a spin on hard, while taking a quick look through the level in easy at a later time. Depending on the choice of difficulty, the actual flow of the level will change, including what you fight against or the location of the silver key for example. The finale especially changes a lot. General progression works well, corridors are all interconnected, adding plenty of shortcuts the further you get for later use. This also makes the level feel like it’s opening out, allowing more freedom of movement as a small reward. The redstone and metal combination runs throughout the map, consistently designed in a similar fashion while not making any drastic changes. Each location is given a lot of shape, using plenty of angles and other large pieces of construction, skylights and chasms to add depth. Walls are never too flat and the ceiling gets enough attention to detail too. Lava is a present set piece too, but less of a hazard considering how little you’ll be near it, and more for cosmetic detail. 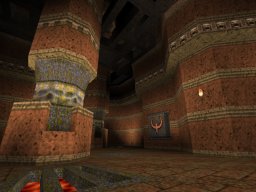 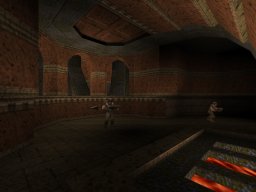 Red Slammer excels with its fast paced brawls where there are fights waiting around every corner. Almost all enemy types have been used, some of them unavailable on lower difficulties however. This variety allows each bout to feel fresh and keeps a steady flow between each area. Balance is just right, good ratio for health and ammo. Nothing here becomes too difficult, while just enough of an edge to keep on your toes for upcoming Vores and Shamblers. The differences in difficulty also rack up the replay value, and as already mentioned, other little bits here and there will add to the experience. Design as a whole doesn’t change much, but the map isn’t exactly too big either. Helpful arrows are placed to point you in the right direction and a sense of height also gives clues you’re getting somewhere. As for ‘carnage mode’, I had a hell lot of fun with it, despite getting through it quite quickly. Basically, all enemies are awake, you get all weapons upon spawn, almost all health and ammo removed, with the sole objective in finding four keys to unlock the exit door. Sounds simple? But be prepared for the carnage that awaits. This mode wasn’t as difficult as it sounds considering all the enemies in their awake state, which includes respawns. Infighting will frequently happen, and having a nice selection of higher tier weapons (and technically, a thunderbolt with infinite ammo on hard) you can blaze right through it. The map is also opened up a lot more, with various additional routes to allow an unlinear progression toward each key which are not present in the previous mode. 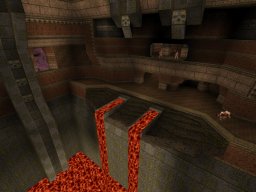 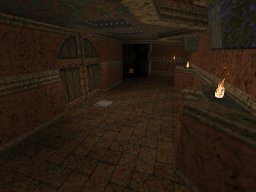 Conclusion
Plenty of replay value to be had here, whether it’s through difficulty levels or ‘carnage mode’. Balanced, fast paced gameplay, lots of enemy variation and an overall good looking level.