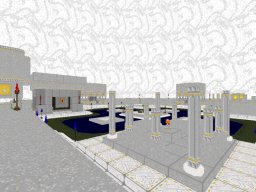 Introduction
Recently gave a read through of my older review as I have been taking an interest in going back to some maps I played in the past. I started to wonder what it was I found so difficult in the first place, and because of this forgetfulness, I thought it was time to give it another visit – some years later. White Light was originally intended for a brightness contest which never took off, and clearly sticks with that goal in mind. Let’s see how it went a second time.

Review
I had thought that after a few years of additional experience, the level may not be as difficult as I seem to remember it. And to be frank, nothing has actually changed, as I am reminded of the reasons for its difficulty. But I’ll get to that pretty soon. The initial goal for the first half includes collecting keys and placing them on their specified pedestals around the map, each time allowing access to the next key which will require some very easy puzzles to be solved. After that, it’s just five switches that need pulled. Visuals are simple while effectively playing with the theme of brightness, using a lot of custom white textures with hints of colour spread around the area to break up all the whiteness, all beneath an eerie liquid sky. General construction is much like a large arena with smaller structures and platforms around. As the level progresses, geometry will change, forcing the level to take a different shape at the end when compared to the start. It really gives you the feeling of a strange new realm. 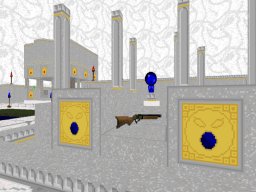 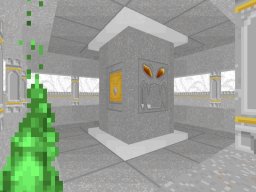 Things kick off once you’ve collected the yellow key where the first enemy appears, and the problems that kinda break this map. The Aeons, as named in the text file, are unforgiving. It becomes a nuisance, constantly trying to get in your way by firing off its deadly projectiles. At first it almost seems impossible to kill as it eats up lead, until you realise it has a lot of hit points, including the super shotgun. The only effective weapon is the plasma gun given at the halfway point. It gets worse when you have more than two at any given moment and things quickly get tiresome. The challenging aspect is avoiding their attacks with the space provided, but any fun factor is taken away because they’re too bothersome to ignore. Even with the special health and armour supplies, they can chew through that in no time. It’s probably possible to run through the level without touching them, but I’ve never had success with it. 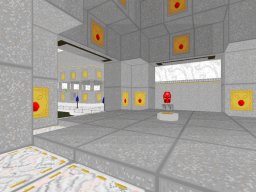 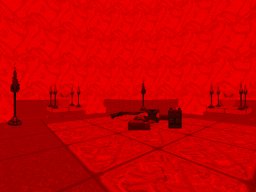 Conclusion
Short level as a whole, simple concepts and interesting visuals, but the tiresome enemies with high hit points squeeze out the fun.