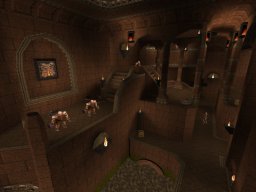 Introduction
Takes place within a series of canyons and caverns, all connecting up to a central location. A red-stone medieval structure, fallen to ruin by nature, while presenting a fresh look to an Elderworld theme. Beware of the lava that flows through, waiting to claim its next victim. Many demons have also made it their home, and will stop at nothing to get in your way, as usual.

Review
Don’t let the calm mood fool you as you relax by the fountain and soak in the atmosphere around you. Danger lurks right around the corner, and it’s not stopping for anything. Interconnected by canyons, caverns and a central medieval structure, the level presents some nice variety and is an undeniable visual treat. What really grabs me is the fresh style of an Elderworld theme, set out by using textures effectively along with the construction. There’s a fine mix between small and large areas, from the natural looking cave system to the grand interiors with many arches and pillars. Another fine point is the use of deterioration where large parts of the medieval structure is breaking apart and giving way to nature as rock has fallen through, collapsed stone walls and lava flowing near and beneath the chambers. I’m actually surprised the water isn’t boiling yet. 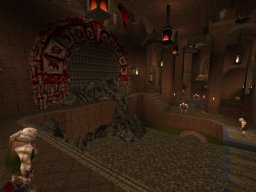 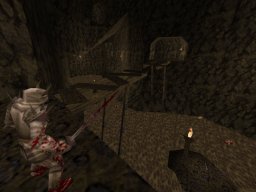 There’s plenty of this ruin taking place throughout the location and still looks fine thanks to good texture alignment, from bust up bridges, pieces of architecture sticking out of the walls and large dented, out of shape doors. This even plays as a small part to gameplay to gain access to areas adding a bit of jumping here and there. Your main goal is to find the gold and silver keys to unlock the final chamber, hidden within these halls. Difficulty is moderate with several spikes where things become more hectic. Most definitely including the the fight at the end. Large variety of enemy types can be found while sticking within medieval tier, throwing small armies to get in your way. Knights play a large role within the caverns while ogres become more occurrent within the central location. Lava can even pose a large threat when up against scrags while hanging onto your life on a small platform, weaving between their projectiles. Good ratio of health lying about, but I find a little short on ammo at times which may force you to rely on weapons such as the grenade launcher in certain situations. 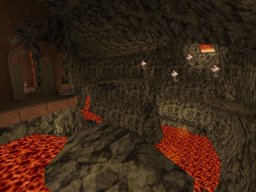 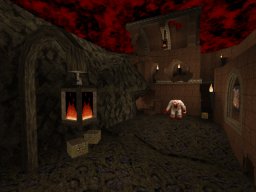 Conclusion
Good experience all round despite some spikes in difficulty, and visually pleasing with good construct and texturing.