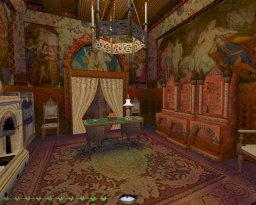 Introduction
King’s Story is a fan mission that sets itself within the walls of Neuschwanstein castle and tells a story, based off of King Ludwig II, King of Bavaria. This is a two part mission, where you’ll start off on a mountain trail to gain access to the castle without causing the alarm to sound. Inside, you are to find and take the crown. But there’s more to this than meets the eye, a bigger picture. You’ve been caught in a trap, but it wasn’t intended for you. Will you look out for yourself, or save someone who needs your help? The King’s palace is a good place for both.

Gameplay
I’ve been waiting for this mission ever since I saw screenshots of it several months back. It recently got released and I jumped right into it, prepared for an indepth and fulfilling experience. But there was trouble. The mission is split into two parts, the first requires you to reach the castle while the second takes place within its walls. This isn’t your usual Thief mission however, as the mission relies on the player finding clues and hunting down keys and objects to get further into the story and unlock new areas. This wasn’t an easy task either. As I progress further, the fun I had was slowly fading away as I started to get fustrated with what I should be doing or where I should be. And I played through this as slowly as I could, searching every room thoroughly and reading everything I had to get any hint to progress further. Despite this, I pressed on, because I wanted to find out where the mission goes and see more of the story. Then again, that depends on what you decide to do once you’ve found the crown. Take it, or leave it? There’s a lot to see and do, I didn’t want to give up.

The problem lies with some clues being much too subtle from time to time. While there were moments I could figure stuff out for myself, simply from exploration and reading. Of course I understand that when you’re designing a mission that relies on puzzle solving, you wouldn’t like to give away the answers too easily. But in some cases throughout King’s Story, there are problems. Some keys that aren’t labelled very well will mostly resulting in a lot guess work. At times, there is too much visual information to see specific objects on certain textures (tower key) or some objects being too small to really notice (keyhole and padlock in the first mission) which will result in people trying to lockpick infront of the security cameras, causing unnecessary fustration. The mountain trail at the start also has its own issues. Leaving the intended path results in a mission failure, which is fair enough, but when the path takes directions you wouldn’t expect it to and pretty much using the same textures everywhere, you’re unsure whether it’s safe to drop down to an area or not. This does improve a little once you’ve gotten past the rock and tree section. 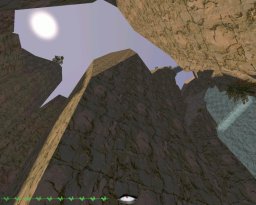 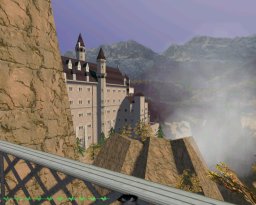 Moving onto the other aspects of the mission, stealth as a whole works fine and I even managed to ghost through it without being seen or caught (ignoring the scripted events you can’t avoid) There’s a lot of lights that can’t be taken out and several tight spaces, but regarding the pattern of patrols and general layout (three stairways) I didn’t have any trouble getting by. Oh, and that brilliant item you can find in the bride’s room, which is extremely useful. But as a whole, for those who generally dislike ghosting and use the trusty blackjack, they will find this one a troublesome feat. Bodies must be hidden well, otherwise, if they’re discovered it will result in a mission failure. Add to the fact several NPCs get moved around as the story unfolds, you may realise the place you’ve dumped the bodies wasn’t as safe as you first perceived. It would be safer just tossing the blackjack out of the nearest window.

The storyline takes a focus on King Harold and all those around him, which remains interesting revealing some of the earlier clues found throughout the first mission. This is what kept me going, to find out more about the mysteries and characters involved. There are cutscenes which work and look good, but I feel they break the immersion, since you learn stuff without actually being there. Whereas, at one point you’ve got to eavesdrop on a conversation in person. Subtitles were sometimes difficult to read because of colour choice as well. Another odd experience was in the first mission when Garrett suddenly starts flying and gets dropped off near a waterfall where you gain control once more. Probably the first time in a while I thought “What… just happened?” since it made absolutely no sense. 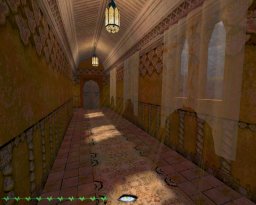 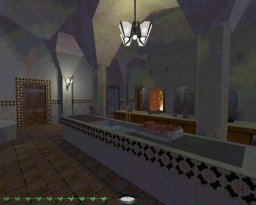 Design
This is something that will be repeated by a lot of people, and here I’m going to say same thing. There is no denying that this is a very beautiful looking mission, designed with care to look visually pleasing to the eye and to create an almost exact replica of Neuschwanstein. I’ve seen comparison shots (Note: These are old) and even checked other photographs and the level design is pretty close, considering the limitations of the engine. What has been achieved is almost like a tour through the interior of this castle, except you get to steal valuables, access places you probably never thought you would and keep a collection of the building’s keys. At least until the end.

Several new textures and models have been used, all based off Neuschwanstein’s interior design and furnishings to put together each room and corridor. The lower sections of the building has a cleaner and more subtle design where the servants proceed with their duties in such places as the kitchen, while the upper floors look more exquisite and grand, approaching busier looking textures, lots of expensive furniture and many wall paintings to ensure attractive eye candy. Even the first mission with its natural looking rock formations for mountains look great. Especially with the weather, which changes from heavy rain and fog, to a mild drizzle, the sun breaking through and a rainbow overhead and progressively gets brighter and sunnier the further you proceed. And then the first sightings of Singerschloss, will probably leave you stunned for a moment or two. 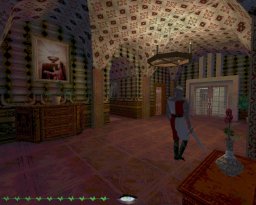 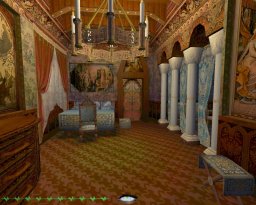 Conclusion
As a whole, King’s Story is a beautiful looking mission that aims to be difficult in progression, relying on the player to figure everything out for themselves and using the clues you find and additional exploration. It’s not the fact that this mission is hard that makes it a fustrating experience, but the way in which the gameplay is designed as I’ve outlined earlier. This mission requires a lot of time and patience to get through it. There are moments I liked about King’s Story but when I sum everything up, I was more fustrated and found myself not enjoying myself more than otherwise. I suggest giving it a go and see what you can get out of it.