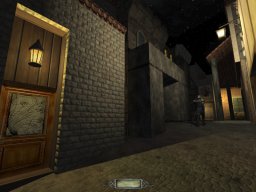 Introduction
Nobody said hypocrisy didn’t have its uses. The Inventor’s Guild, always so secretive about its own inventions, isn’t beyond a little espionage when it comes to the inventions of others. They’ve hired me to steal the design notes from a young man named Soren Rikk, just on the outskirts of the Highlands Ward. He’s reputed to have made a huge discovery in a field the Inventors have some interest in. It should be an easy job. Soren isn’t known to be a dangerous person.

Gameplay
Patently Dangerous takes place within a small city section where you need to find and retreive the design notes from Soren’s home. But such a simple task is never what it seems and that shows in this mission. The level itself may appear small but there is still plenty of places to explore and of course, steal some loot. Guards are going to mostly roam around through the streets and are generally easy to avoid, while the interiors have less NPCs to bother with. The numbers increase depending on which difficulty you choose. There’s plenty of shadows throughout both the streets and interiors, which even includes Damuddy’s upper floor, and there are even a few shortcuts in the streets around buildings to avoid lit up areas. Though generally the level can be too easy. 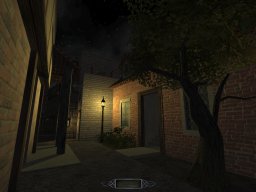 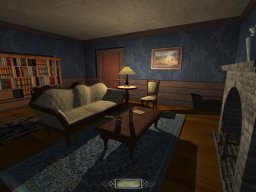 There were a couple areas in this mission that caught me by surprise. I never expected there to be some roof climbing, which allows access to areas you can’t from the streets. The second would be the neat story that is developed by the readables. Everything in this mission actually links up into the same plot and it keeps you going as you start to piece everything together. The wharehouse upper areas also had the perfect mood with a steady build up and includes a great choice of ambience. There is a funny situation concerning the Harlan objective however through a little experiment. Even if the guy is dead you can still complete the objective (while failing another) which is pretty hilarious; although I’m unsure whether this is a limitation or not at this point in time.

Design
Generally the design is good where each building differs in terms of style despite the small size of the mission, from stone and brick to wood based structures. The layout itself isn’t too bad either with good sized streets and buildings. Each of the interiors look different from each other, especially the houses by using a different colour wallpaper or floor texture. Though sometimes the construction of the level is a little quirky at times. There are a few bits that stick out where it appears they shouldn’t, or some of the brushwork overlaps if you look close enough. 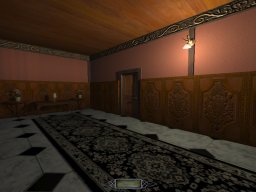 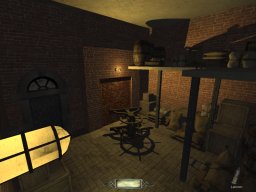 Texturing can differ between being good and average. Most of the house interiors do look nice, but a few areas on the streets or the bathroom walls in Damuddy’s place were a bit too simplistic. There is even the case with a few missing and misaligned textures, like on the edge of a roof or around Soren’s house. Even the upper areas of the wharehouse are bigger than what the building itself, which seemed odd. To put it brief without nitpicking too much, the mission could have gone through a bit more polishing in terms of design. As far as lighting goes, streets have a good mix between light and dark spots, while interiors can be a mix bag. Soren’s upstairs is probably the only location I really felt could have used more lighting. The upper areas of the wharehouse uses a good choice in how to light the environment and the texture choices fit the mood. Combine this with the ambience and mood, it’s probably one of the best locations because it has a lot of favours working for it. 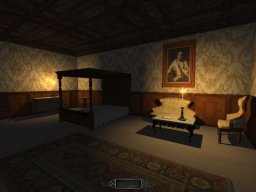 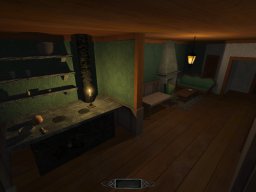 Conclusion
It’s an enjoyable mission with a neat story, plenty of areas to explore and has a fairly good design. Gameplay can be a little too easy however and the design could do with some polishing.

One thought on “Patently Dangerous”