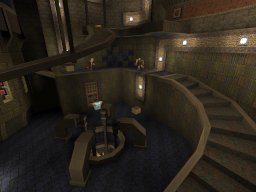 Introduction
Originally designed for the 768 x 768 Vertical Map Competition held in ’07, Skinny Norris is a large tower-like level for Quoth using an unusual mix of themes to create the playing field against a large variety of enemies. You must travel high and low in search of a way out of there, but at least you get the choice between the puzzles-path or traps-path. Isn’t that nice of them?

Gameplay
One noticable aspect from this map is the large variety in which combat is approached. There is a fair mix between smaller brawls and few larger battles here and there. Adding to that is the use of vertical combat, including the choices of enemies you’ll be fighting against; almost using every enemy type from both the vanilla set and Quoth. This always keeps you on your toes, since you’ll never be sure what’s around the next corner. I must mention however, I disliked the enemy respawn change in the higher difficulties after finding the silver key since the Drole has more chance in causing some damage, wherever you choose to fight it.

The author has done a good job working with the limited horizontal spaces, there are occassions where it does gets a little too tight at times. You may find yourself getting stuck trying to walk up the curving walkways, but this doesn’t happen very often. I played through the level twice and only encountered it during the second playthrough. I loved having the choice between taking either the puzzles or traps paths which was the sole reason for playing the map twice. It adds that extra bit of replay value and player preference. The puzzles were neat, but as the author already mentions in the text file, can be a little fustrating. Traps were also thought out well, my favourite being the one on the lift, simple but effective. 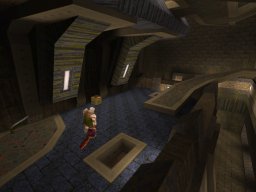 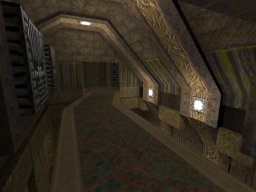 Design
There is an unusual mix of themes going on here from the wide choices of textures, but for some reason they work well together. The colour choices and style in which some combinations are made are consistent right the way through, nothing really stands out in a bad way. The blend between brickwork and metal with the subtle hints of tech help allow all the different enemy types to fit into the map. The construction itself resumes this unusual style from the twisting pathways, some of the structural pieces poking out of walls and the overall layout. The author even pays attention to smaller details, noticable where the lifts connect to the walls. 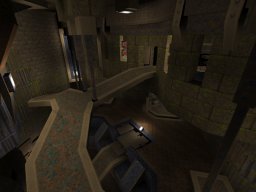 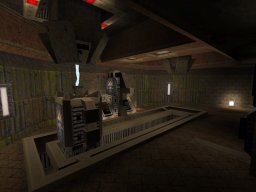 Conclusion
The large variety in enemy types used and styles of combat ensure the map is fresh right the way through, including some replay value from the choice of two paths halfway in the map. The level consistently uses its unusual style and definitely looks good.