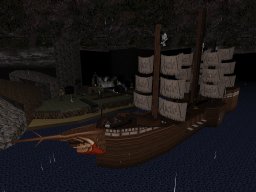 Introduction
A massive energy burst has been detected at the EDF’s island base, which has attracted the attention of the aliens. All radio contact is lost, so Duke is dropped in to find out what is going on there. DPCBP is the first community project specifically created for use with DukePlus by Deeperthought. The map focuses on the use of the Skycar in a fairly large map created by; Gambini, Mikko Sandt, Crux Borealis, Rigelblast, Merlijn van Oostrum and Maarten van Oostrum.

Gameplay
The map combines the usual action scenarios on foot, along with the attention towards the use of the Skycar to cause havoc upon the aliens and to travel between various locations. When on foot, the action is pretty much moderate with enough enemies to battle against without it being too easy of a task to accomplish. While in the Skycar however, enemy count does increase at times and especially during the final area of the map, which are pretty much cannon fodder to the vehicle’s weaponry. Through the map you’ll fight a variety of enemies, including a few from the DukePlus selection and the occasional boss fights here and there. Most enemies carry keycards of which must be killed before you can progress, forcing you to fight some battles out. There are a few other instances of features used from DukePlus, such as a canon on the pirate ship or using night vision to locate invisible enemies, but these seem to take a minor role in the overall experience. The general flow will have you travelling a short distance between different sections of the map via the Skycar, with parts that force you on foot to later come back to the Skycar. This is a pretty nice blend in the level to not make you feel forced into the Skycar all the time, using it to slaughter masses of enemies rather than sticking with your regular weapons. The gameplay is generally hit or miss in the long run, since the focus is to use the Skycar at times, the vehicular aspect isn’t for everyone but isn’t a major abundance to the level either. You’ll be given a decent amount of weapons, ammo and health throughout with instances of atomic health here and there. 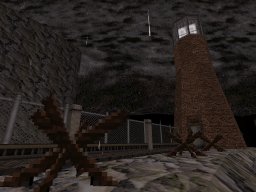 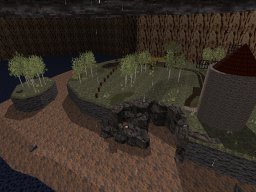 Design
An excellent part of the map is the design itself, which remains consistent throughout the various sections despite having multiple author’s working on the project. From the start you’re thrown onto an island that pretty much screams Gambini, if you’re familiar with his previous level Blown Fuses. His part takes place within a small village with a great looking pirate ship and lighthouse nearby, where his design scheme follows a rather realistic tone in terms of construction and fresh looking spritework spread across the map. Between the two seperate islands include some great looking foliage, made up from a variety of different sprites adding an original touch to the lack of plant assets available in Duke, and work very well; there’s even a small cornfield! Mikko’s section approaches his minimalistic style to create a nice little base area to store the Skycar. You’ll eventually take this towards the isolated island to later access an alternate dimension, created by Crux Borealis & Rigelblast approaching a very depressing and moody vibe, using a lot of grey textures for the terrain surrounded by deadly lava. The odd crystals scattered around are also a fairly nice touch to add that little bit of contrast. Eventually you’ll access a cave system with a high tech area, including the core all created by Merlijn, proceeding to Maarten’s atmospheric caves with a nice blue ambience. 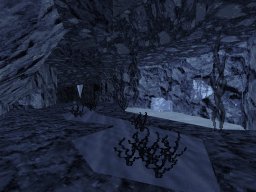 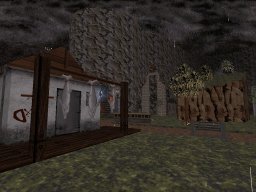 Conclusion
The focus on the Skycar may be hit or miss, but the gameplay is mostly moderate, with a fair mix of action both on foot and in the Skycar. Design is excellent, remains consistent and has some innovative foliage spritework.