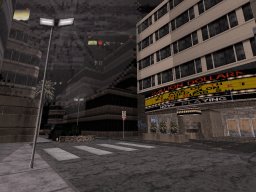 Introduction
Tribute to Action II is the next in line from the series, the first created for Shadow Warrior, while this release focuses on Duke3D. Duke is thrown into a large city, where the goal is to simply kill every alien that gets in your way while collecting the odd keycard and having a fight with various mini bosses; a very action packed map made for DukePlus.

Gameplay
The map starts off with Duke leaping onto a rooftop before crashing into a billboard with his shuttle, and from here there is a short distance walk before facing against a horde of enemies. Tribute to Action II is a very action packed map and pretty much remains like this for the entire journey, fighting against hordes of enemies at a time with little breathing room between them. Opening up with the lesser creatures, the level eventually picks up by throwing tougher enemies and larger hordes your way at varying sizes as you progress, which keeps the pace up and works quite well for the most part. Ammo and health balance shouldn’t be too much of a problem as it is plentiful, including some secret areas to grab some extra pieces if you need it. Enemy count is pretty high, and you’ll be fighting against quite a number at times which can be challenging but nothing immensly difficult overall, with the odd sections with helper AI Sentry Drone bots to lend a hand. Throughout the level, there’ll be the odd mini boss fight between sections which you’ll need to defeat to access the next location adding a nice change from the hordes. The level can be enjoyable at times while some fights may get dull, the subway section and later sections killed it for me. Fighting against a horde of enemies in the dark subway while lights are flashing about was a very irritating experience, and the boss fight was extremely dull, chewing up a lot of ammo before it finally decides to drop dead. 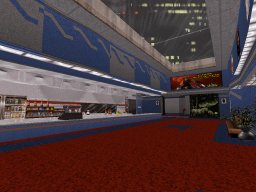 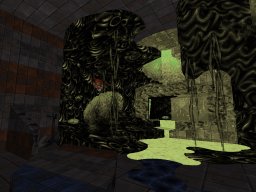 Design
The level design is on an average calibre throughout a majority of the map, sticking to a minimalistic style to create a large city environment. During the early parts of the map the design is pretty decent in places and the areas with destruction give a nice sense of an apocalypse in the city itself. However the design eventually starts to dimish in the latter sections. The first street section looks nice, with some neat buildings surrounding the cinema, while the interior has a rather mixed design. The cinema looks rather decent, especially the upper offices, bathroom and alienated bits, while some elements didn’t seem to work very well such as the upper textures near the skylight in the refreshment area. Much later on however, the design seems to become more simplistic and the texturing as a whole isn’t done too well. The choices were fine, but their usage just felt more of an afterthought. Some windows just plain cut off halfway, there are some other minor errors with textures being applied to walls that obviously wasn’t intended, which could have been easily avoided. Texture alignment and trimming was lacking, and the actual design in the later part of the level just looks like it was rushed compared to the first half. 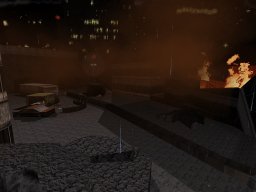 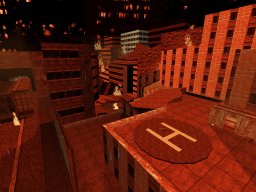 Conclusion
Very action packed level, with some challenging hordes to fight against. Design is decent but tends to suffer from a lack of proper texture alignment and trimming, and sometimes feels rushed.