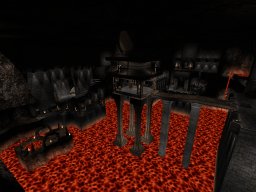 Introduction
On your journey, you come across a small gate and decide to enter. However, the gate closes shut behind you. You now only have one way to go, and that is to continue forward. Here’s a map released in ’08 for Quoth, the first out of two levels in a small pack, that takes place in a huge underground cavern with a large lake of lava at the depths below.

Gameplay
I was rather dissapointed with this aspect of the map, since I found it to be lacking at times when it comes to the action. Some locations near the first half of the level seem to lack a good number of enemies in various spots, and some sections can be too easy. The map has a brilliant tone to it, very atmospheric with great usaged of ambient sounds, which would have really worked nicely if the action was a little more on the threatening side since exploring had an interesting creepy feel to it. From time to time there are a few small spots that have a nice little challenge, such as the early Shambler respawns, but as a whole it’s a rather easy expierence. The map is littered with ammo and health (more than needed) and some enemies can literally be sniped off from a distance with virtually no effort, and the usage of the Quoth enemies could have been done a lot better. 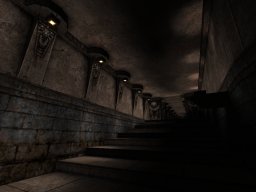 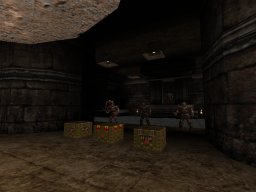 Design
This is where the map shines through the construction of the huge cavern and it’s various structures throughout. The main chasm is large with a huge lake of lava flowing in the depths below and looks great as a whole. The stone work has various angular pieces such as the edges of the ledges, while using a nice blend of grey bricks and brown stone. Lighting is also a nice accomplishment with the mix of spotlights throughout each of the various sections leaves a lot of dark patches that really helped create a grand and eerie looking atmosphere. 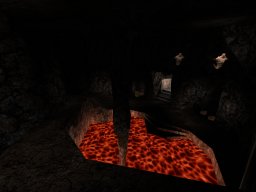 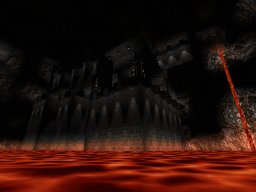 Conclusion
Although the map has some brilliant design, the gameplay falls rather short by being mostly too easy and really misses out on taking advantage of the atmosphere it creates.