Castle of the Dark Ages 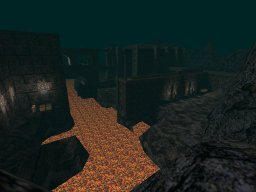 Introduction
Castle of the Dark Ages is a rather large map from 2005, that takes place in a huge open enviroment with several buildings, making use of fog and coloured lighting with a mixture of interior and exterior action throughout. It is also recommended to use the FitzQuake port to run this map at its best.

Gameplay
As a whole, the map is a fairly large, open level that takes place both indoors and out with a mixture of fights throughout each area with enough room to navigate around in. This does however cause the early fights to be a little too easy at first, but the battles do get bigger as the map goes on. Expect to be fighting against plenty of knights and orges most of the time, with various instances of zombies, fiends and vores. Although large of a level, the flow of the map works at an enjoyable pace, where fights are balanced with few short breaks between them, enough ammo and health supplies to get you through the map, and a good spacing between weapon pickups to not overpower the player too soon. Action is also fairly varied, with a small mix of vertical combat here and there along with some rooftop battles to spice things up. 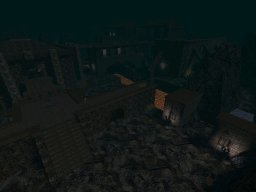 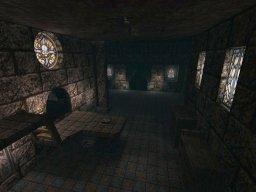 Design
Despite it’s size, the level has been constructed very well to create a really dark and eerie atmosphere to make the player feel alone in such a grand location, surrounded by large cliff walls, a thick layer of fog and a large river of lava that really help set the mood. The structure of the level is consistent and the texturing is solid, which remains fresh looking throughout each area. The church exterior itself looks great, with it’s tall scale, large flying buttresses, complete with small windows and a large rose window that add a nice contrasting touch against the dark colour scheme. 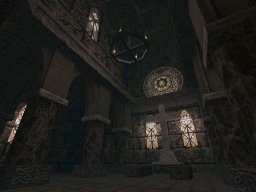 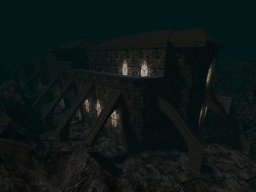 Conclusion
Castle of the Dark ages is a large and atmospheric level which both looks great and has fairly well paced gameplay.