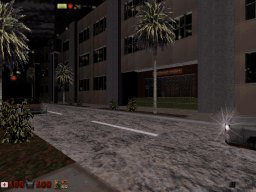 Introduction
The third in the Sky City series, takes place where the second left you off. This time around you are within another city, where most of the gameplay will take place within a school building. The objective here is yet another keycard hunt while including a lot more action than the previous two levels.

Gameplay
As already mention, this time round the level includes a lot more action than the previous two with a nice steady pace, and a few boss battles in between. Nothing too difficult however, but the location is an improvement from the last as there is more space to move around in. The classrooms however might be a small problem but nothing too major. There are enough supplies around to keep you going, with a few useful hidden goodies to grab here and there. 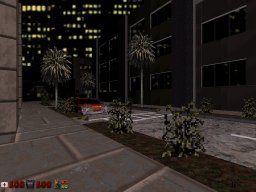 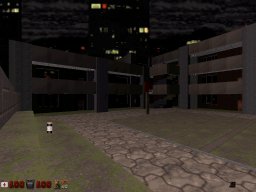 Design
Structure of the level has been done quite well, and the city itself has a different style to it compared to the tall buildings from the first Sky City. The author also added a rather neat trick with reflective windows, however it does look quite odd in certain areas such as on the car windows for example. The school building itself is done pretty well, while using a lot of sprite to make up the various floor sections of the map and various furnishings throughout the classrooms. Lighting again is pretty decent and keeps a nice, simple sense of dimension to the overall level yet isn’t as good as in the first Sky City which is a shame. 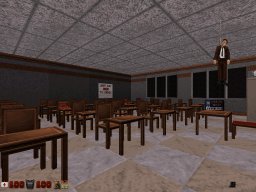 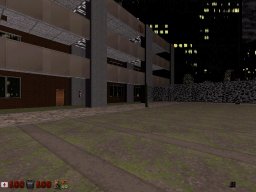 Conclusion
Enjoyable and fairly action packed, with some pretty neat design and structure throughout.