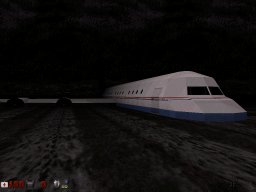 Introduction
The second in the Sky City series, starts you off where the first level left off, which is inside of the plane where you must once again fight your way through various cramped corridors and rooms, and go on simple keycard hunts until you reach the end. Another straight forward goal to reach just like in the previous level, so how does this one fair?

Gameplay
Unlike the previous Sky City, this one is a fairly short level to beat yet has more enemies to fight againsts with an awkward sense of flow. The tight corridors and rooms make the action rather tedious to fight in, especially since some locations are filled with enemies. I have even encountered getting stuck on top of the alien heads at points, or having a hard time to maneuvering around. There were a couple of other awkward encounters as well such as the commander or battlelord, which overall didn’t make much of a fun experience. The battle outside however was rather epic and done quite well, which also has a nice atmosphere with the pigcops flying around the plane. The objective is simple, yet the gameplay wasn’t exactly too enjoyable considering the level design and could have been improved with less enemies and a longer level to play. 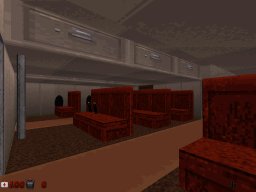 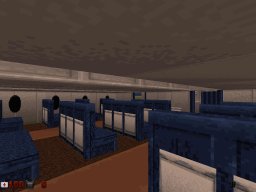 Design
As with the previous Sky City, this one also takes on a simplistic look which looks fairly decent in the cabin sections, but rather bare in other areas. The level itself is also a tight squeeze throughout, with rather thin corridors and rooms with too many seats or crates close together that really affect the gameplay aspect of the level as already mentioned. The plane’s exterior however is brilliant and looks just like one, with the windows visible along the sides, a clean job with the texturing, jet engines, visible rudders and tail. Even includes the bottom half underneath the clouds and overall is the best aspect of the level itself. 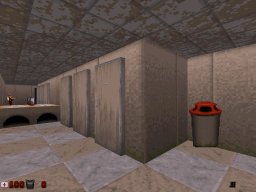 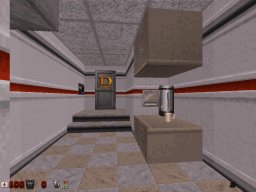 Conclusion
The tight gameplay causes this level to fall flat, including it’s too simplistic level design in some areas, while the exterior looks fantastic.