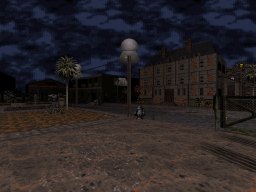 Introduction
Here is yet another map that has recently been released, this time from french author, Aymeric “MRCK” Nocus. Duke has decided to take yet another break to relax, have some drinks and enjoy himself. All doesn’t go to plan when he find’s those alien maggots have invaded the downtown areas and destroyed the bus he was taking. Once again, it is up to Duke to kick their asses and save the day.

Gameplay
The map starts off by throwing you straight into the action after exiting the bus, which was fair and nothing too difficult to accomplish and starts the level off with a nice tone. However it then quickly moves onto finding one of the keycards around this small city section which does take a while due to the various invisible walls and doors which do not open and personally got rather annoying first time round. Luckily there is a hint to help you find where it could be, but even that needs to be found. From then on, the level itself is fairly action packed, with a mix of small and medium sized firefights, along with enemy and boss respawns to keep the older sections fresh to go through. There are plenty of supplies about, more than enough ammo so the level should be easily accomplished as it isn’t too difficult. The initial gameplay is finding various keycards and unlocking their doors closeby and going through various sections of the city as the day goes by. There is also a rather original section to the map where Duke gets drunk as well, causing things to look out of place and outright crazy, which was a pretty nice touch. 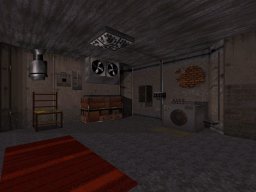 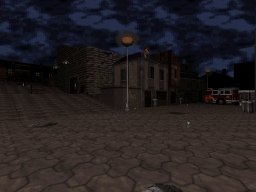 Design
Just looking at the level design alone you can easily tell this is a map designed by Aymeric. The level is rather detailed, with some original looking constructions for each building, lots of usage with sprites and various other tricks to create a fresh looking environment using the original assets. To add more depth to the level, there are various unreachable locations through the map to make the city feel larger than where the player is limited to, which is always a nice touch to a level. However, the level design does have a rather messy look to it in some cases, specifically the gold/bronze palettes, and a few unnecessary details here and there. Most of the texturing is good, with some unusual yet fitting choices in some places. Spritework is found everywhere, throughout the streets and inside each of the buildings to add small details such as pipes and wires, to bigger objects such as tables or chairs. Another decent point about the design is how each of the interiors has it’s own specific look and style to it, both with the texturing and lighting choices made for it. 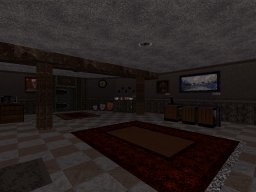 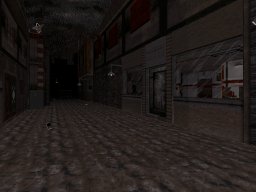 Conclusion
Action packed, medium lengthed map with some decent city design which looks great in some areas, while messy in others.