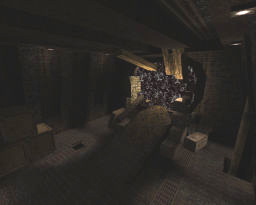 Introduction
Travail is a mission pack that consists of thirteen singleplayer levels, with two secret levels found via specific levels within the mission pack. And also included within the pack are four deathmatch maps, for those interested. This review however only covers the thirteen main singleplayer levels within the mission pack, which are spread across two episodes and a finale. These are accessed by the start map similar to the original game, the first two of which can be completed in any order. I played through this mission pack using the “Normal” difficulty level.

Episode 1 – Ingeniero de la Destruccion
The first episode and being my favourite of the pack. This one consists of four maps and a boss map at the end to conclude this episode.

Piedracero
The mission pack starts off pretty well by supplying the player with some simple combat, slowly progressing towards more of a challenge later on. Grunts, Enforcers and Ogres are the main roles of enemies found within this level, with some nice vertical combat throughout the early stages of the level, while supplying the player with a nice balance of supplies. The design of the level uses a nice mixture of greens and blues, while have some nice waterways and large canyon cliffs to break the environment up here and there while looking appealing to the eye. Some areas can however be quite a tight squeeze, but nothing to be overally concerned about since most of the action takes place within wider locations. 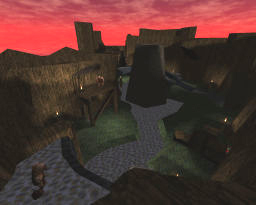 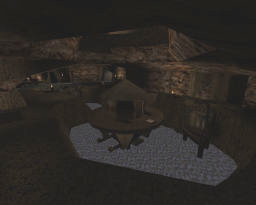 Aguenergia
The locations here appear much more wider and open compared to the previous level, while having most of the action take place inside smaller buildings found on the cliffs or closer towards the dam. Action here isn’t too difficult to handle since you’ll mostly be dealing with Grunts and Scrags. However some of the Vores can be a pain to fight when they catch you off guard, but ammo and health shouldn’t be too much of a problem. In terms of design, although rather open, the level is detailed rather well and has some really well made features such as the dam and the bridge. 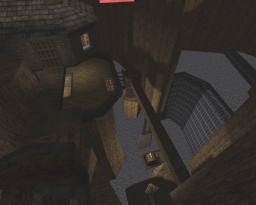 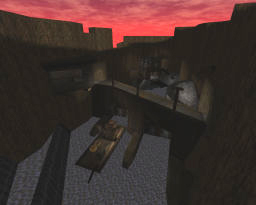 Costarodillo
This here is a rather challenging map, and can get very hard at times. Quite a tough one to beat but again nothing impossible and comes out, quite a brilliant map in the end. There is a nice variety and progression here as you will find yourself fighting it out in both large and small locations. The level starts off quite open, while the later parts remain quite closed up and tight making some really intense moments. Some respawning enemy patterns can also be quite mean to the player, but remain enjoyable as long as you keep watch of your health. The design here works quite well, both the large open landscapes and smaller interiors. Each location keeps a consistent blend between the design styles used in each section of the level. The interiors give off a dark, grunge approach through the good usage of textures and structure found within these locations. 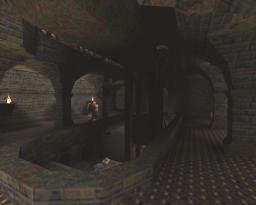 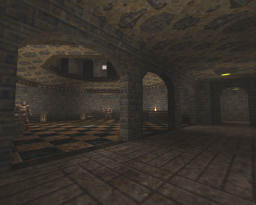 El lugar feo
This is a rather hectic level which also consists a lot of action taking place underground, most of which can be found within the large cavern areas. This time round there is a little bit more space to move around during the battles, while continuing to have a lot of respawning enemies entering the midst of a fight. This can be quite a challenge, especially against Vores since it’s more difficult to stop their homing attacks. To make things even more intense, there is lava at the bottom of the caverns which should cause a lot more caution when moving about. The combination however was rather enjoyable since the pacing and flow of the fights was quite well balanced, while keeping the challenge intact and continues throughout the level. Ammo and healths supplies are once again plentiful yet balanced considering the style of battles found here which again was good. The level itself is rather well designed and looks quite beautiful with the mixture of browns while the lava and torches contrast with the environment. The scale of the level being quite large isn’t left under detailed and keeps a solid structure throughout the rest of the level, being well lit and consistent. 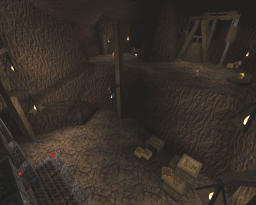 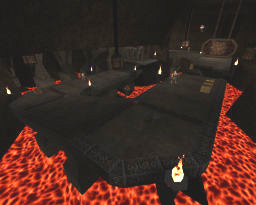 Roca de la perra
The conclusion to the first episode which starts off in a very dark, hellish looking cavern while rivers of blood flow through, which gives off the vibes that you’re not welcome within this realm. The atmosphere set is rather lonely since your first task is to unlock five seals before you can take on the battle afterwards. This boss fight is a nice little challenge with a new enemy model to make things more fresh, while the lower sections have plenty health and ammo supplies to get you through the battle quite easily enough. The mix of the location, design and the final battle is a decent conclusion to the first episode. 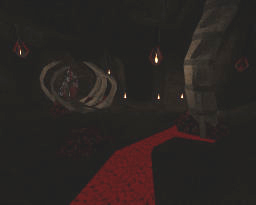 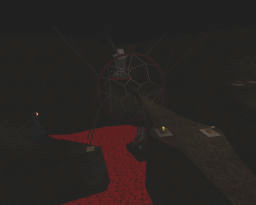 Episode 2 – Architecto de Miedo
The second episode of the mission pack which consists of four levels, ending in quite a different manner to the first.

Tejido de cicatriz
Another beauty within the mission pack which has some very supurb design throughout the level, mixing the elements of rock walls and old bricked building really well. The level is also brightly lit while using a very sunny sky this time round adds a nice atmosphere to the level, which a majority of areas remain quite large. One decent example is the library section is is conceptually grand and appealing, remaining very well detailed and one of the best locations in this episode. The gameplay side of things in this level also remian quite a challenge, since you’ll be starting off with the single barreled against a majority of tough enemies. The later sections such as a library give you a nice taste of a new shotgun weapon where you’ll find yourself fighting a horde of Knights trying to make mincemeat out of you, while avoiding the homing fire of Vores. Enjoyable level, action packed and nicely balanced with a good amount of supplies. 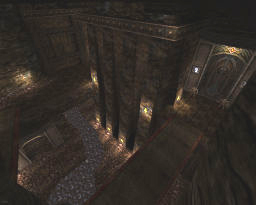 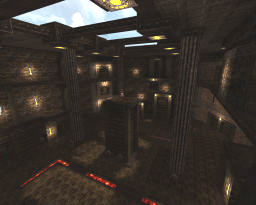 Voces extranas
This here is also another nice level within the episode which continues directly where the last level left off, where a lot of the action this time round will take place in medium to small sized locations. The level could be pretty much divided into three sections, the first being the central areas with a good looking structure in the middle, while the bridges here connect to the other two. The first area consists a mixture of metal and bricks with a few traps and a lot of tight action against Ogres and Knights, as well as fiends which haven’t been seen at all during the first episode. The other location consists of a fresh looking, grey-blue bricked interior where you’ll have a very simple and easy mini boss to fight against which wasn’t anything really special. Action all round in this level is nice and varied between the different sections and has a nice challenge between them. 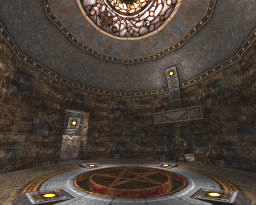 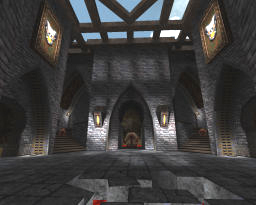 Punto de la infeccion
From here on out, the action takes place within bases once again while fighting againsts more Grunts, Enforcers and Hounds. The level starts off with some nice cool blue coloured based, while slowly progressing towards a more brown tech base. To make the action a little more fresh here, there are also two new Grunt enemies to fight againsts which make up for some interesting skirmishes. The action isn’t exactly too difficult here, but it can be tricky against a lot of Enforcers’ lasers flying about from several different heights. The level is a nice mixture of tech and caves which blend together quite well and remains rather detailed throughout with some clean, tidy structure to boost. 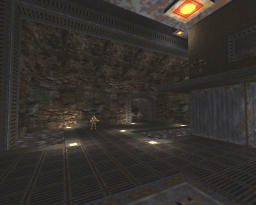 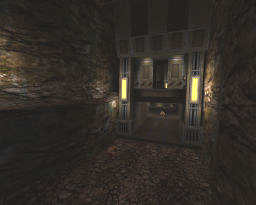 Excision
The conclusion to the episode which is rather short and the first part should really take too long to complete, depending on how it is approached. Some of the earlier battles can actually be avoided since things can get quite difficult with three Shamblers roaming about the upper areas. There isn’t a boss fight found in this level, but you will be fighting against a more slower, yet robotic type of Enforcer with fast homing missles which can be a bit of a bother. The battle itself has it’s ups and downs, since it is a fresh way of concluding the episode this time round, but can also get fustrating due to the lack of more health supplies. The design itself is also a little on the bland sides, quite darkly lit in the upper and lower areas, but works out quite well during the actual fight sequences. 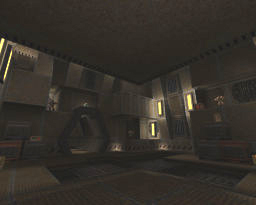 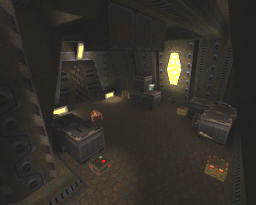 Final Episode – Un Paso mas Alla
Consists of three levels, two of which are boss maps and is accessed after completing the first two episodes.

Hacia la fuente
This is an odd one in the pack as it takes place within a blue coloured base which floats within a void. It also feels out of place. Gameplay is pretty standard and follows a similar route like a few of the previous ones, this time focusing on more Ogre combat, with some tricky Vores placed here and there, and ofcourse plenty of Scrags about too. Nothing too difficult to handle in this one, especially since it is plentiful in supplies as well. As already mentioned, this one feels out of place because the flow and atmosphere felt a lot different compared to the previous levels found within the mission pack. The blue base theme did get quite repeatitive and dull after a while, but it did look quite nice having a few interesting look pieces of structure here and there. Another possitive was the good usage of well lit areas throughout the level. 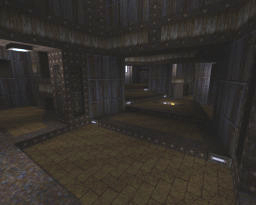 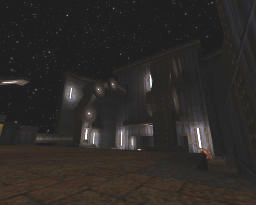 Torredalmas
Pretty interesting map in terms of design with a nice conceptually grand looking structure in the main playing area of the map. The level starts you off from where you ended the previous, where you must work your way up to the island above. The catch is, falling means instant death. Once at the top, this is where the first part of the boss fight takes place which is possibly the hardest fight so far. The enemy model itself does however feels out of place and does’t match the style of the other creatures, but it does have a varied pattern of attacks and stages to make the fight a little more interesting. Ammo and health are scattered about on the structure, while the player must watch out for the bosses attacks can cause some pretty fustrating moments too. 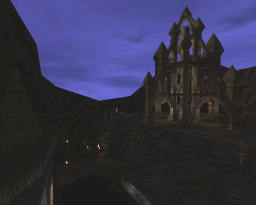 Puentaltrono
The second part of the boss fight, which starts off with the player having to decend into the crypts for a while before the battle continues. The level itself is a bit of an anti-climax finish to the whole mission pack since the battles here area rather easy to accomplish, as well as the design being rather simplistic at the start, while having a few interesting sections such as the crypts themselves. 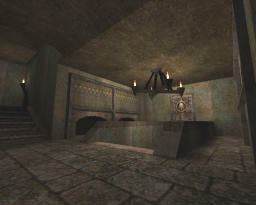 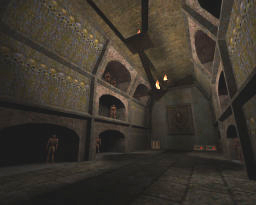 Conclusion
This is deffinitely a high quality mission pack that is worth checking out, while the first episode remains the best, while the rest of the pack has its ups and downs. Flow between some of the levels are sometimes inconsistent, but the overall pack has great design and some enjoyable, challenging gameplay throughout.