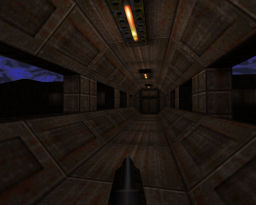 Introduction
My first Quake map. I’ve been playing Quake since 1996 and I always wanted to make a level. Well, better late than never, eh? I’ve been building mostly Duke3D maps for the past ten years (sad, isn’t it?) so Worldcraft was somewhat new to me. This may be one reason why the level is somewhat x-axis and blocky (not that that was my intention – it’s just something that happened subconsciously). Naturally, I had to learn the editor as I worked on the map. It’s not so bad – there’s a fair amount of details, the texture set is lovely and the gameplay was tested (by The Silent & Sielwolf) before release.

Gameplay
Rather straight forward objective in this level, finding the keys to exit the level while having a short little battle here and there with a few grunts or other nasties that await. This isn’t exactly a walk in the park, but nothing impossible to accomplish either since things can get quite hectic if you don’t watch out for enemies. The two grunts in packs can be quite troublesome if not dealt with quickly, especially since health packs are limited. The fights with the Shamblers can also be rather tricky at times. Ammunition is plentiful and should get you through the fights fairly well, with some secret areas too look out for as well. 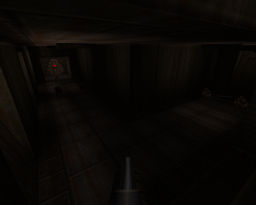 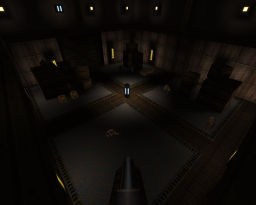 Design
The design is rather decent for a first release in the Quake universe and sticks throughout the rest of the level. The texturing and structure doesn’t go over the top and works fairly well. Lighting however was rather dark in some areas which was really awkward a lot of the time, than atmospheric. Other later locations were fine in this department though. The level contains a nice range of wide and compact areas which helps varies the combat, while also making use of some vertical action too. 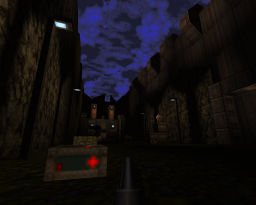 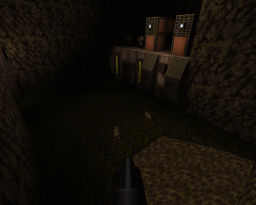 Conclusion
Decent level with solid design and some simple, yet tricky gameplay.