The Last Train to Marsville 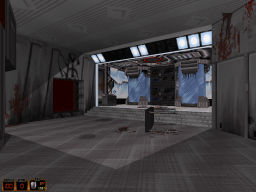 Duke was supposed to be the subject of a top-secret cloning project, but the robotic train that was transporting him in cryo-stasis has crashed… Mars colony is under attack.

Gameplay
The map itself is rather large, and the transition between area can be rather unlinear a majority of the time which actually remained immersive than an annoyance. It’s not exactly possible to get lost in this one while exploring the dark interiors of the colony or the baren, red desert landscape of Mars itself in a very consistent manner. You’ll be finding yourself walking upon the surface a few times, but a majority of the map is set inside. Everything throughout the map remains enjoyable and interesting as you progress through, the action itself is balanced and plentiful amount of supplies exist place around very well. Generally like a lot of maps, you’ll come across switches and keycards which doesn’t come across as tiresome, and rather spaces these bits out quite well so you get a bit of the action and a few switches to press now and then. 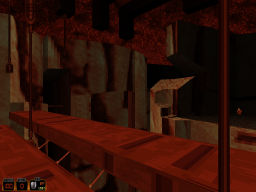 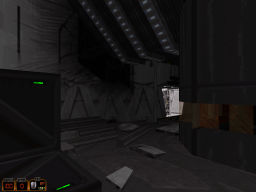 Design
The map consists of the dark and eerie interiors of the Mars colony in small to large rooms of specific purpose. The red fogs adds a lot more to the atmosphere in some areas to give the place a more abandoned feeling while other details such as broken objects, bust down walls and burned marks upon walls adds that extra touch to the overall design. The structure of the interiors is done fairly well, nothing too complicated yet remains good looking due to the good use of textures, both new and old. Lighting also increases the mood up a lot which again like the design is good looking and rather realisitc, especially in one of the chamber rooms. There were however some storage rooms which were filled with crates, some of these were actually rather creative. On example is the large cardboard box with tiles found inside which strays away from the typical four sided, one texture crates, although a minor details, adds that extra touch of knowing how much work was put into the level.

The exterior locations of the map are the most impressive, with a very grand scale while remaining pleasing to the eye. Even the use of a red palette on the rock surfaces helpes create a fresh charm to the textures to give it that extra boost of a Mars setting. Unfortunetly, the chosen sky texture for the level also broke up in some places which was rather a shame, but doesn’t affect the map in the long run. The structure and use of textures for the exterior parts of the facility remain as detailed as those found indoors.

Conclusion
Fresh, immersive and really well designed map set inside and out of the Mars colony. Great quality release with a decent gameplay worth checking out. 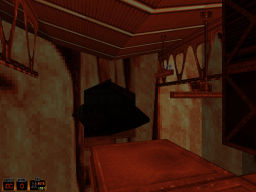