Gameplay
Another one of those apparantly complicated maps by Billy Boy set within a nuclear waste faclity, and plenty of action about too. The map deffinitely have its fair share of obscure puzzles as typically seen in a majority of this author’s work but nothing impossible to handle. Decided to once again pick this map up and attempt to complete it for first time, without those failed and clueless situations. With success the map was completed from start to finish using no forms of cheating of which came around as an enjoyable experience. The puzzles aren’t exactly complicated in this one as most of the locations switches activate are indicated via signs. The only major key is a good eye at spotting cracks in walls or vents, and a sense of location. Without those the overall mission may come across difficult as many players have had issues with. The action however is what makes this one add the most difficulty as aliens are found at all angles, some of which are shooting from windows making your task a little more trickier to approach. Enough ammo and health placed around the map, and should last throughout without much problems. Some of the flow can be disrupted from cramped areas that are sometimes a bother trying to avoid enemies, especially Fat Commanders indoors. A sense of satisfaction is rewarded each time you get further within the map which is a nice plus.

Design
Very detailed with a unique structural and texturing style unique to create the nuclear waste facility. Exteriors and interiors have much more shape in them and remain less square from this while the usage of textures add most of the detail, some odd choices but they work well. Structure and spritework has been done well throughout looking solid especially in the outdoor areas. Lots of interesting usage of sector tricks to have enterable buildings, with windows and roofing you can walk on, mainly levels of height in others via the use of elevators. Lighting remains moderate and done fairly well, where the usage of certain sprites help some effects looks a little more realistic. 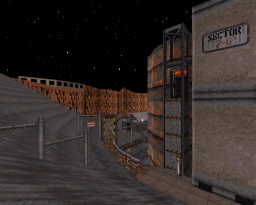 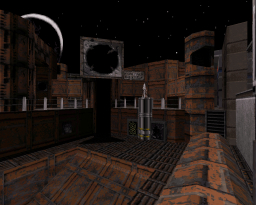 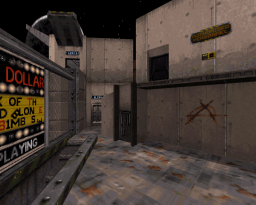 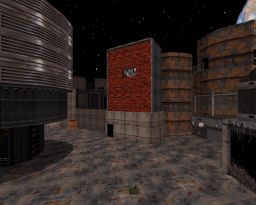