There’s no point sticking to the normal system for this one. Very short and simple map that doesn’t really seem it’s supposed to be a playable map. You spawn inside a terribly designed large room, where lighting does exist, which is full of soldiers fighting against Xen creatures. The overall point of the mission is to destroy the Gargantua, but once that is done nothing much else happens, not even a fade to black to stop the map. There is another room there which is shown in the second screenshot where you will find some weapons, ammo, chargers, dead bodies and a headcrab. Nothing much else to do except let the soldiers deal with the monsters or do it yourself, but it is rather just a waste of time bothering with this map, although playable to some extent. 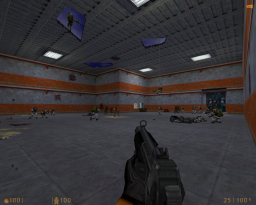 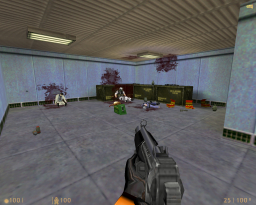