Ravenloft – Chapter 1: The Village of Barovia

Gameplay
Quite a challenge, especially as many of the monks can pick you off from a distance if they notice you soon enough. Several zombies and monks are used throughout the map, with a few other creatures which could have been used more here and there to add a little more variety. Good blance of ammo and health, but could have used more in a few places. There doesn’t seem to be any major gameplay except fighting your way towards the castle above the mountain to end the map. Could have had a better flow yet it is still an enjoyable experience.

Design
The first thing you’ll notice once loading the map is the well made woodland area with a path which takes you towards the town, is constructured realistically and with decent texturing to help make it look better. Nothing looks blocky in these areas as the oddly shaped walls prevent that and keep the location looking correct with a few usages of sprites and some well done lighting. Eventually after following the path, you come across what looks like at first a small village but soon finding out it’s a large town with many buildings, each with its own design, style and shape though with matching textures to keep the colour tone and choices balanced. Some of which can be entered, though the interior design is rather average and empty. For the rest of the map, it has a few quite large open areas and other places worth a visit. Few small errors and bugs, and a wierd sky issues near the mountian you soon climb up but doesn’t cause any major gameplay issues.

Conclusion
Well designed, enjoyable map. Gameplay could have been a little better though. 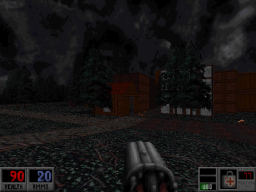 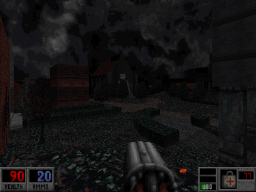 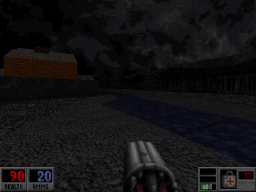 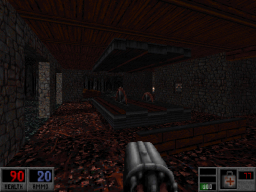