Gameplay
You take the role of a sheriff in the western times, so the mod includes new weapons and enemies which fit in this setting. You’ll come across mainly humans in this one such as bandits, indians, miners and more each welding different weapons to fight against you with, and a few animals as well. There is also several different locations you’ll be coming across but mainly several canyons and caves which does get a little boring. Throughout the mod it can get very tiresome to play due to its length and the repeatitive action half way through, which was a shame since the start was rather fun. The action can get difficult as there are several gun welding enemies in groups of three in nearly every room or outside somewhere which makes the fights rather dull, especially with the weapons you’ll be using. There is however plenty of ammo, health and armor around. The western atmosphere has been achieved well though and sticks to that through out.

Design
Above average throughout with some decent structure for the buildings and especially the canyon areas of the mod. Texturing is also done well but the quality of them are quite low and most of the woods look quite ugly. As stated above, there are many canyon and caves to venture in which all look the same except for some texturing styles in some places which can make these locations boring to play in. Lighting is moderate, but quite bright outside to keep the warm weather feeling around each of the different maps and looks good throughout without many problems.

Overall Conclusion
Decent western style mod, with above average design but gameplay can get tiresome. 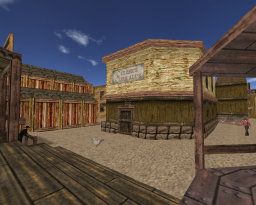 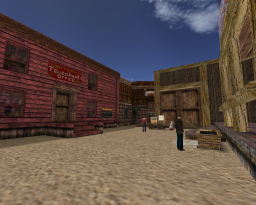 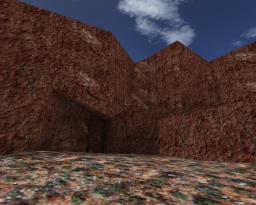 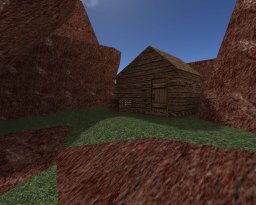