Gameplay
Balanced yet challengine throughout with a good flow and plenty of enemies to fight against. Enough health and ammo around which can be used up quite quickly during some of the battles, but the main objective is to find keys to progress on and there are six of them. Lots of respawn traps which become obvious once you learn the pattern keep some action for when you trackback which is good, and some secret places to find as well with hidden goodies. Several of the enemies have been used throughout at well chosen spots, and there are also two new enemies are included in this map, one of which is used only a few times.

Design
Decent and detailed structure throughout the entire map with good texturing, aligned and chosen to mix well with everything else. Mixes of greys, browns and several lights give the map more colour, especially with the chosen theme where a new skybox has also been used. Other interest details are mirrored floors which give it more of a futuristic tone to the map. Although the design is great it gets a little repeatitive and could have had a little more variety. 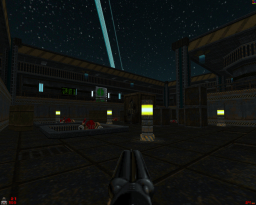 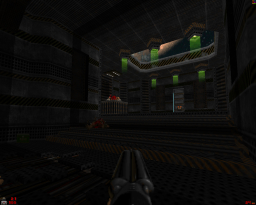