Gameplay
Taking a step away from the typical Doom gameplay and giving the map a different approach makes this one interesting to play. Instead of the average waves of enemies and obvious respawn traps while searching for switches and keys you are stuck on an island where you must find objects, solve puzzles, defeat bosses and find journal entries to develop the story slightly or give out clues. Ofcourse you also have a variety of new enemies on this island adding to the challenge, using sprites from Doom or Hexen with new scripting. The map starts inside a small intro room with some information and areas to set monster spawning on or off, which adds to difficulty and then to choose a skill. It also tells you to set the new controls which can be found at the bottom of the “customize controls” option. Back to gameplay, you must explore each area finding clues to what you must do to proceed on into new areas. Some require some careful looking while others won’t be accessed until much later when you found a certain object. Some of these can set traps that spawn an enemy or force you to fight a boss in either a large or small area. There are three weapons to find, one which is an axe and the other two are guns. Although there isn’t any ammo elsewhere in the wad, your ammo will still run out but will refill after some time. Health and weapon levels can be increased affecting the overall gameplay making the task a little more simple, especially with a high amount of health making you surive in those boss fights longer. Health can also be recharged when blowing out the candles where you level up from. Other than that there are two endings depending on how you play through the map, since if you leave most of the main bosses alone you will get a bad ending so it would be wise to find and beat them all but it won’t be easy since some areas are well hidden. Flow can get a little tiresome a lot of the time when you get stuck and don’t know what else you can do, however the author included some tips in a text file to be somewhat helpful, although finding you way around will get simple enough as you can get used to the layout quickly.

Design
The author makes a lot of use out of 3D floors throughout the map and a lot of sloped terrain to give it a more natural touch, although a lot of the rocks get boring to look at when travelling between each of the areas back and forth as the textures get dull. The map has been designed well though with several interesting locations such as a forest, some caves, ruins and much more to explore which have been textured well to give the area it’s own look except for most of the rock terrains. Structure of the ruins are really good however with solid details and good set of matching textures to stand out from the rest of the map. A lot of curves and ceiling details also keep these places from being empty, while other ruins are completely destroyed with nothing left except a few walls and some candles. Several waterfalls, rivers and lakes are placed around the map added a bit more colour in some areas and looking more natural with some hidden locations underwater also to explore. The skybox has also been chosen well for the map, although a little dull, fits well with the atmophere of being stuck and alone on this island. Some ambient sounds are used in certain locations but it was far too quiet most of the time, although this can add to that lonely feel it makes the map feel dull when venturing through each area. New music also comes with the wad to add a bit more atmosphere to several locations but nothing enough to remove the boring as mentioned.

Overall Conclusion
Different style of gameplay which is a love or hate situation. Great design but the wad can get somewhat tiresome or dull at times. 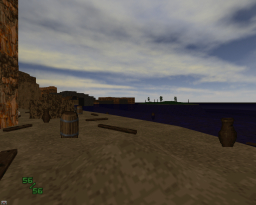 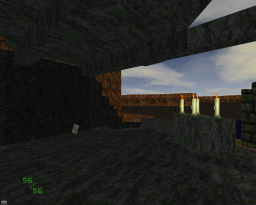 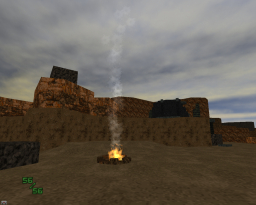 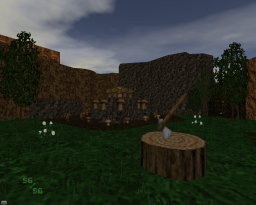