Story
About 2000 years ago, according to legend, while snow was falling on a clear, freezing night on Earth, a fierce devil prince was born deep in the darkest pit of the netherworld. Within a short time he gained his full powers and took over the Devil Throne. His first act as ruler of all devils was to declare himself emperor of the Devil Kingdom. His next feat was an invasion of the human world. His plan was to conquer it and rule as potentate over both the lower and upper realms. But a powerful devil-knight known as Sparda took pity on humans for their brief, transient lives. Leading a rebel force, he defeated all the Devil ruler’s armies and finally imprisoned the emperor himself in a sealed vault. Having achieved his victory, Sparda abandoned the Devil Kingdom to live in the human world. He married a human woman and soon fathered a half devil, half human son. But beware, mankind. After 200 years, the cursed evil Emperor will be released and will return to invade the human world once again. Sparda’s son must be our protector! 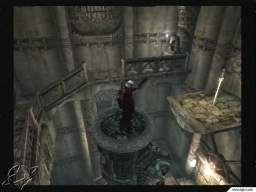 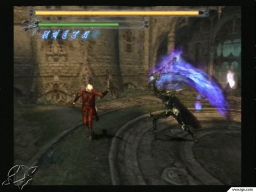 General
Fast and action packed during each of the twenty three missions. In each one you’ll be facing hordes of enemies and tough boss battles, each one different from the last. Ofcourse, there are quite a lot of cutscenes in the game, some of which show you what you tiggered, show you what you’ll be fighting with or ones that just develop the story further. Throughout each of the missions you will be travelling around the castle doing small, simple objectives to continue forward. Usually when getting closer or getting to your goal, you’ll be forced to fight something that is trying to stop you from accomplishing your task. Each of the missions has variety, where you do something different to achieve your goal, such as an arena, misty forest or first person swimming which won’t bore the player. Each mission is a good size, which lasts long enough to keep the player excited and have a breather afterwards. Between each mission you also have the choice to powerup before entering where you can buy upgrades to Alastor / Ifrit or buy some items to help you when you need it most, using the red orbs you collect throughout the game. There are also many secrets throughout each mission, be it hidden items or secret missions, each adding to the overall gameplay making it more interesting, sometimes you will jump somewhere and hit the ceiling to be treated to many red orbs, or other items that then drop down, these can be anywhere but most are unexpected. There are also a good selection of weaponary that you collect in a good flow which can be useful depending on the players battle style or likings. There are four different melee weapons; Force Edge, Alastor, Ifrit and Sparda. There are also firearms which can be used along side your melee weapon; Pistols, Shotgun, Needlegun (underwater only) and Grenade Launcher. 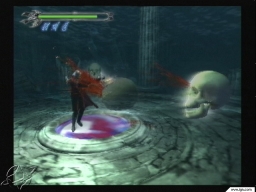 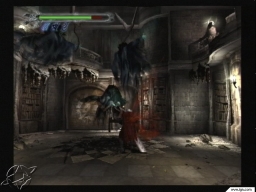 Difficulty
Being an action packed game, it can’t be complete without some difficulty which this one definitely has. Nothing is at all easy, but balanced well to make it very challenging where the player must come up with strategies and watch their enemies attack pattern. The weaker enemies are easy to handle but when serveral of them are in the area can be quite a bother but nothing too hard at all and can be taken down with ease. There are also boss battles every so often which can be really challenging. This is what I have been looking forward to in games, are some hard boss fights since many games now make them too easy. Each boss has a weakness that can take off a lot of health, however they can kill Dante in no time if the player isn’t careful. However, everything is balanced and very possible but it may take several tries to accomplish the goal. 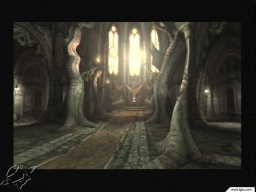 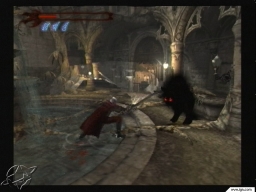 Controls / Battle System
I found that the controls were easy to get used to, which made it better for the fights throughout. They are quite like Resident Evil’s but ofcourse more freedom. The position for each control was good enough for me, especially using Circle to use a melee weapon or Triangle to jump as I didn’t have any problems when playing through the whole game. The only thing that bothered me when fighting the enemies were the camera angles to points where you can’t see who you’re fighting. Other than that the system was really good, Dante locked onto targets but you could still easy turn around and attack one he wasn’t using either a melee or firearms. You could also force a lock on using the R1 button which was very useful at times. There are a lot moves that can be used against enemies, some of which can be bought. Some attacks were even possible in mid air such as shooting, striking the sword downwards and such moves. Devil Trigger mode is where you build up a gauge by attacking the enemy or doing a successful taunt where you can change into a Devil form for a small period of time, depending on how big your gauge is. This can be made larger by finding or buying purple orbs. In Devil Trigger mode, your attacks are a lot more powerful and faster, which even affects the firearm you are also wielding. Items can be used, such as Holy Water which damages all enemies around you, or even heal yourself using a vitality star. 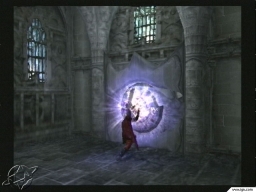 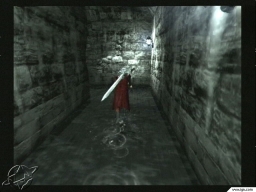 Design / Music / Sound
Beautifully crafted castle enviroment with details everywhere, which looked fantastic throughout setting off the mood very well and the locations fit the theme very well. The style of the caste was great, it looked very mysterious yet magical at the same time, especially during different conditions of weather or lighting. Everywhere felt atmospheric in it’s own way, the interiors of the castle looked exquisite or the outside areas looked ancient, especially the arena area. Enemy designs were good, nothing the looked out of place and fit the enviroment well with fitting tones of colours in the overall location. Music fit where it was used, but could of stood out a bit more during the missions, I did however reconise a track which was slightly modified from Half Life. The rock tune used for the battles were very good, kept the excitement during the fight and adds some tension to them. There wasn’t a great deal amount of sounds but I quite liked how many sounds were reused during certain events in the game such as explosions, examining or picking up items. Door sounds were obviously from Resident Evil but this gave it more atmosphere and reminded the player of another great game made by the same developers.

Replay Value
There are unlockable characters and difficulty modes each time the player completes the game and also depending on the rank they get. Completing the game can unlock some things, which getting an S rank every round can unlock other things.

Overall Conclusion
Fast and action packed, balanced and challenging battles with an atmospheric and detailed enviroment and large variety in gameplay.