Gameplay
A quite difficult one with some traps throughout the map. Each section of the map contains plenty of enemies to fight, which can also pose a big threat, but are mostly in front of the player at all times. After doing key objectives, more enemes are thrown at you in a blanced way, as the map also contains plenty of health and lots of ammo, too much of it in many areas. The harder fights are rather too easy as the player is given many items to use which isn’t too good, and ruins the challenge there. Other than that, there is the interesting section where you must enter 3 different areas and do 3 different puzzles to access the final area which I found was fun.

Design
Above average, structure is good but misses a lot of detail in some places which is however filled up with other things such as sprites and objects that fit the location. Texturing needed work in some places as the overall mix wasn’t too great, although there were some really well designed rooms throughout, especially the offices. Lots of sprites fill up the emptyness but the outside locations felt too bare and didn’t look too good either.

Overall Conclusion
Quite difficult gameplay with a bit of challenge and a good design throughout. 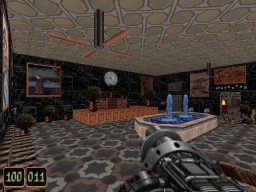 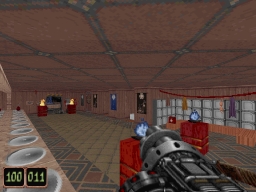