A scary themed level from one of the greatest mappers around. When I first played this map, it scared the hell out of me. The gameplay was fun in this map, as well as scary. It’s half adventure with a scary touch and half mission based. There is enough ammo and health to keep you going throughout the level, and monster placement is good to give you a scare, or challenge.

Merlijn tends to mix textures together and use a lot of palette values in his maps, and this is one of them, although he uses more reds. Texturing in this level is done well, but I didn’t like certain textures in certain areas of the map, such as metal walls in a hotel. Spritework is done well, nice 3D tables and other objects, although some texture choice for those sprites could of been a bit better, but it was still good enough.

One of the good maps in the time it was released. Scary level, with some really nice extras. 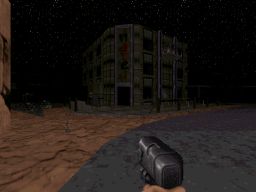 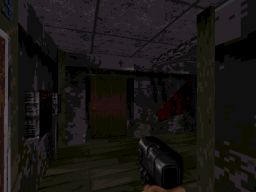