Easy map, with a few spots of needed health but the map is very possible and quite long. Enemy balance is good except for the slimers as they got very annoying. Commanders aren’t over used and there is plenty of weapons and ammo to use against them but too many chaingun pickups. The map also has plenty of health but can be used up quickly if not careful in combat. The map is your basic keycard hunt but the map is still lengthy with the many underwater areas and other rooms.

There are many different designed locations, some good yet the others are either randomly designed or very plain, but the level is designed well for an oldie. Texturing can differ in the different areas of the map, but chosen well and aligned fairly good, but most areas have really bad texturing and stucture. One random looking room filled with lava looked quite good but could of been better. Shading is used in the map and looks fairly good yet the dark rooms look dull unless you let light in. Many underwater areas too which are done well and large enough for the enemies as well you the player. Enemy placement is quite bad in some places such as the angle of the enemy. I found an octabrain underwater very close to the corner looking into it which isn’t a good place for an enemy.

Fairly good design and a fun gameplay with plenty of action. 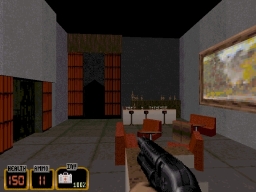 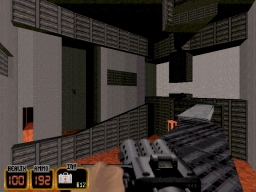