This map has a lot of nice ideas throughout the map with average battles. Map isn’t too hard and theres plenty of ammo around. Map can lack some health though and some fights can be too easy. The parts I found interesting was the underground areas and the part where you press two switches and lava pours out of the mouth of a texture. Enemy balance is good, but sometimes could of used more respawns. Some fights can be tight but very possible, even for the Mancubus’s.

Top notch design with a gothic feel to it. Texture choice is good and constructions are very nice. Slope work has been done well and sprites have been chosen well and suits the area. Lighting looks realistic and adds to the maps feel a lot. The underground area looks good since it was made well, has a dark mood to it. Trimming was also done very well in the map too.

A good ZDoom map with average fights, plenty of ammo but a bit lacking on health and a great design to go with the map too. 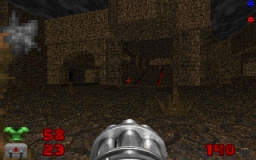 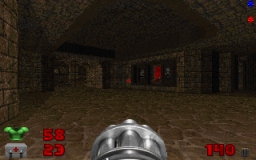