Gameplay
A very simple map to play with some challenging enemies in some areas whereas a few can be annoying. There is not many hordes of enemies in the map, and usually sticks to groups of two or three. The map keeps the health supplies consistant so theres plenty around after those challenging sections. Plenty of ammo is placed around, though mainly for the shotgun. The map has some nice features such as readable notes on the wall which gives clues to secrets and how to continue onwards and some are just warnings yet are still interesting to read. The notes also add to the mood of the level as it spices up the gameplay a bit more. The map also uses some swing doors which is a nice change but open a bit too slow. The map has a good length to play through, plenty of enemies to fight and a lot to explore.

The feel of the map is a bit creepy, especially in the basement areas but they could of been a lot darker to increase the mood. The upstairs and ground floor areas alo have this creepy atmosphere that makes you feel that something may be behind you at any given time. The level also had a Resident Evil feel to it too, due to the many rooms and the quality of furniture skins on the models reminded me of the first Resident Evil graphics, which isnâ€™t a bad thing at all.

Design
A lot of plain walls but the textures help do the job, however some more details could of been used such as beams, arches, and more paintings. The bigger areas and corridors felt a bit empty and could of used some plant pots and made to look a little more interesting to the player. The lighting is dull in the map, but fits with the mood yet some areas could of been darker to add to this. The furniture models have been used well and placed in realistic positions and locations. Texture choices are good but some areas should have some more trimming and the ceilings were a bit bare. The 3D floors are used well in the map for stairs and railings on the first floor and some of the furniture too. The doors in the map were very big and could of been a lot more smaller as this ruined the design in the map.

Conclusion
A very well made mansion with a great atmosphere. The design could use some work, but the gameplay is fun and isn’t too hard. 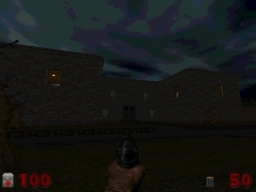 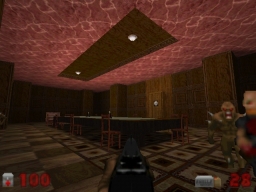