Halfquake can be quite fustrating here and there at times, but it’s nothing impossible to beat. This one has an interesting amount of puzzles and action giving you only a certain amount of weapons and ammo depending on the section, most of the time you have no firearms. Most of the puzzles are pretty much simple as they’re mainly button hunting, while others require you to jump around. Longer puzzles are made more interesting by making it harder each time you get further on. The only enemies that you fight against are headcrabs and alien slaves which aren’t too difficult to face, except the areas where there is a horde of them.

A lot of the time you replay certain chapters, or dp a similar style of gameplay that you previously did, only that it is different that time round adding excitement preventing it to feel very repeatative. The flow of the gameplay is pretty much linear as there isn’t much choice on how to complete an objective or puzzle, most of the time its very obvious stuff. The ending boss “fight” – Somos, was quite interest yet simple. It was mainly a lot of button pushing without too much of a challenging. Dodging his swinging blade was also really easy. However I did die quite a lot for the trap doors opening and closing which is a good istration, especially with that blade swinging around.

Rather average throughout with a few interesting looking levels and a few bad looking ones. The structure for each level reminds me of Quake more than anything with large brushes to construct the detail in most areas and simple texturing, especially those spikes in the architecture that are used quite a lot in the modifacation. The level with the floating block platforms with brown metal spikes coming off is my favorite from Halfquake as it looks very interesting and original. Some of the badly designed levels are more or less basic throughout, with horrible lighting and structure. There isn’t many of these levels however which was a good thing. Lighting on a whole is average, nothing too special or too bad but could have used a bit of work, because they looked rather unrealistic due to the light source in the area. The modifaction also has a lot of viarity from different styles and themes for levels, each that have been textured fairly well but nothing too special in either remaining average.

Quite fustrating but possible. Lots of interesting elements and average design throughout. 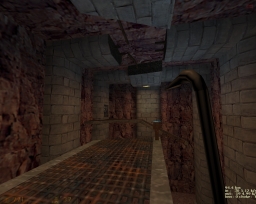 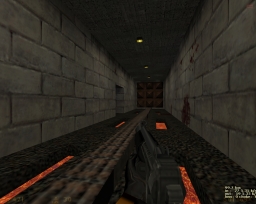 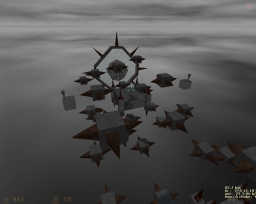 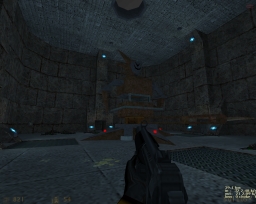