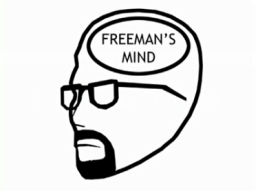 A majority of us gamers have bought and played a copy of Half Life throughout some point since the release of the game. Upon playing the game we find out our hero, Gordon Freeman, doesn’t say a single word throughout the entire course of the game, unlike popular gaming characters in the past such as Duke Nukem or Caleb with their witty one liners and rude remarks. This was all to make the player feel like they’re part of the world and keep them immersed with the world of Half Life and the Black Mesa facility. The start of this still continued into the world of Half Life 2 while Gordon Freeman remains a silent man through out the series of games. However, if Gordon never spoke during the Black Mesa incident, then what would he have been thinking in that head of his during the course of the game?

This is where Ross Scott comes in with his Machinima, Freeman’s Mind. He takes the role of voice acting Gordon’s mind throughout part of his journey and what he assumes he may be thinking at the time adding a humourous side to the free man. So far two episodes are available, but coming across them when mentioned over at the 3DRealms forums, I found them rather funny and worth a little mention in the spotlight section. The author mentions in his blog however, “Well here’s the second and possibly last episode of Freeman’s Mind. Despite the majority of people liking it, I don’t like having to make everything a monologue and then time it to the footage.” but even so, hopefully the guy will eventually make more episodes of this little series, I’ll deffinitely be looking forward to more of these and possibly cover them as well. Links and videos can be found below.